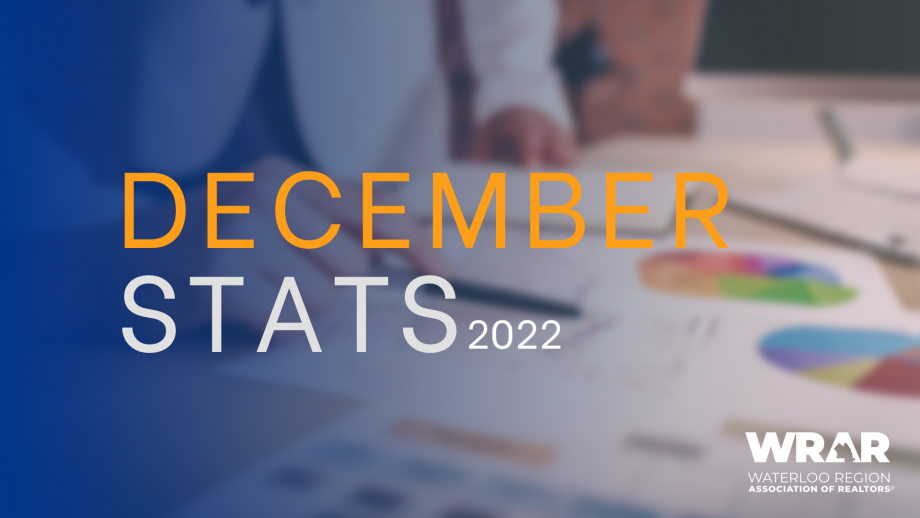 WATERLOO REGION, ON (January 5, 2023) —There were 7,770 homes sold through the Multiple Listing Service® (MLS®) System of the Waterloo Region Association of REALTORS® (WRAR) in 2022, a decrease of 24.8 per cent compared to 2021. On a historical basis, 2022 performed lower than previous years, with annual sales down 12.4 per cent compared to the previous 5-year average, and 8.2 per cent below the previous 10-year average.

On a monthly basis, there were 280 homes sold in December, a decrease of 38.7 per cent compared to December 2021, and 32.3 per cent below the previous 5-year average for the month.

“The number of homes sold in December was lower than any single month in well over a decade, marking an end to a turbulent year for home sales in Waterloo Region,” says Megan Bell, President of WRAR. 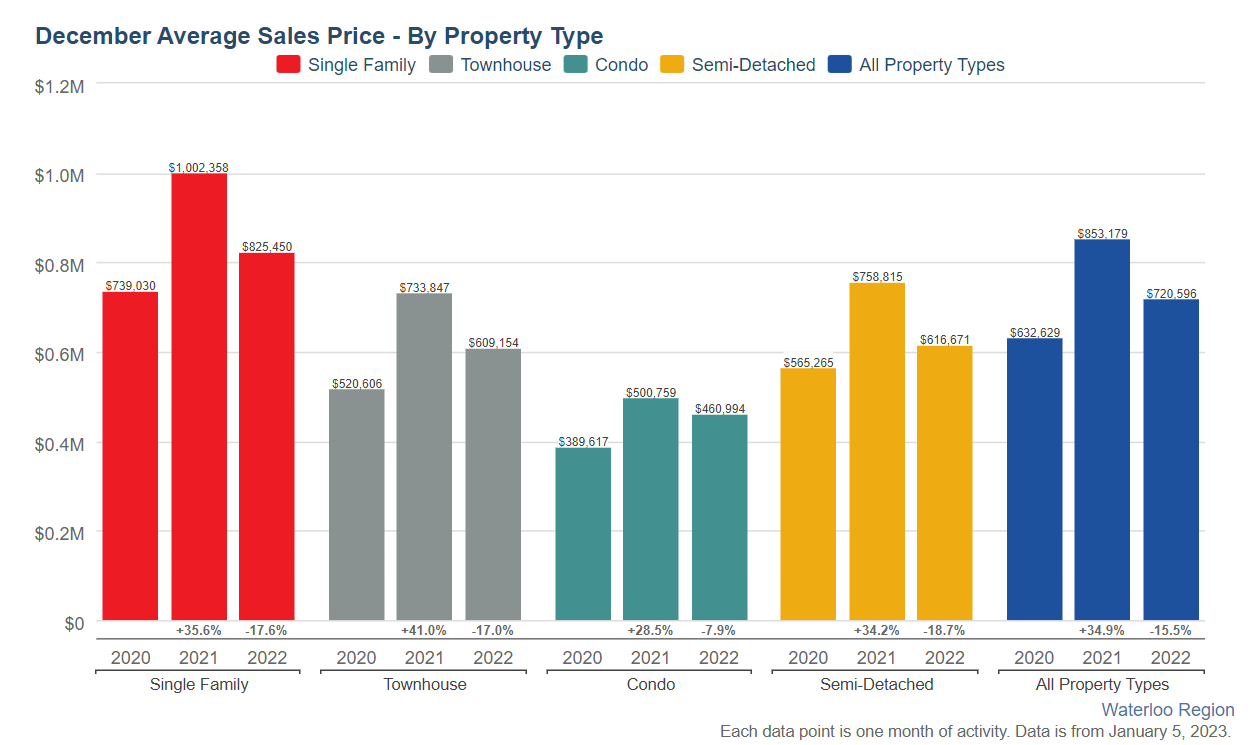 On a year-to-date basis, the average sale price for all residential properties in Waterloo Region increased 10.2 per cent to $851,185 compared to 2021.

WRAR cautions that average sale price information can be useful in establishing long-term trends but should not be used as an indicator that specific properties have increased or decreased in value. The MLS® Home Price Index (HPI) provides the best way to gauge price trends because averages are strongly distorted by changes in the mix of sales activity from one month to the next.

“After home prices crossed the million-dollar threshold in February of 2022, we close out the year with average and benchmark prices back to where they were prior to them surging in early 2021,” says Bell. “It’s clear that the decline in sale prices has been a direct response to the successive interest rate hikes by the Bank of Canada throughout the past several months, however, with interest rates predicted to stabilize, we should see a steadier market in 2023.”

There were 302 new listings added to the MLS® System in the Waterloo Region last month, a decrease of 20.3 per cent compared to December of last year and a 14.9 per cent decrease compared to the previous ten-year average for December.

The total number of homes available for sale in active status at the end of December was 575, an increase of 329.1 per cent compared to December of last year and 31.3 per cent below the previous ten-year average of 837 listings for December.

The average number of days to sell in December was 25, compared to 11 days in December 2021. The previous 5-year average is 24 days.

While future homeowners should benefit from the fact that prices have come down from their extreme highs of early 2022, home affordability will continue to be a concern in 2023. Bell says, “The easing of home prices has not done much to help first-time buyers as soaring borrowing costs have put monthly payments out of reach for many prospective homebuyers.”

WRAR’s president also points out that Waterloo Region remains one of the tightest real estate markets in Canada as measured by months of housing supply. “By no means is Waterloo Region a buyer’s market,” says Bell. “Our community is in high demand as a sought-after place to live in. And throughout most of 2022, we were working with less than one and a half months of supply of inventory. Combined with rising interest rates, it is still a challenging market for buyers.”

However, Bell is pleased to see various government interventions and new housing policies set to come into force throughout the year. “One of the upcoming options for first-time home buyers includes the Tax-Free First Home Savings Account (FHSA) which is designed to give first-time home buyers the ability to save $40,000 on a tax-free basis with an annual contribution limit of $8,000.” The government is working with financial institutions to have the infrastructure in place for individuals to be able to open an FHSA and start contributing at some point in 2023.

Chartered Professional Accountants of Canada say Canadians can begin contributing to the FHSA in 2023 even though the rules don’t come into effect until April 1, 2023. Full details from the Government of Canada can be found here.

The provincial government has also introduced several bills that tackle the housing crisis head-on. “One change in particular that has caught my attention – is the move to see gentle density and intensification within residential areas by allowing up to three residential units ‘as of right’ on most land zoned for one home without needing a municipal by-law amendment,” says Bell. “Realtors were one of the first groups to champion ending exclusionary zoning. It will be noteworthy to see how this is integrated within Waterloo Region and in communities across the province.”

Those requiring specific information on property values should contact a local REALTOR®. Working with a Realtor is the best way to get a complete picture of the property and community you are considering.

Click on any of the graphs below for an interactive view. 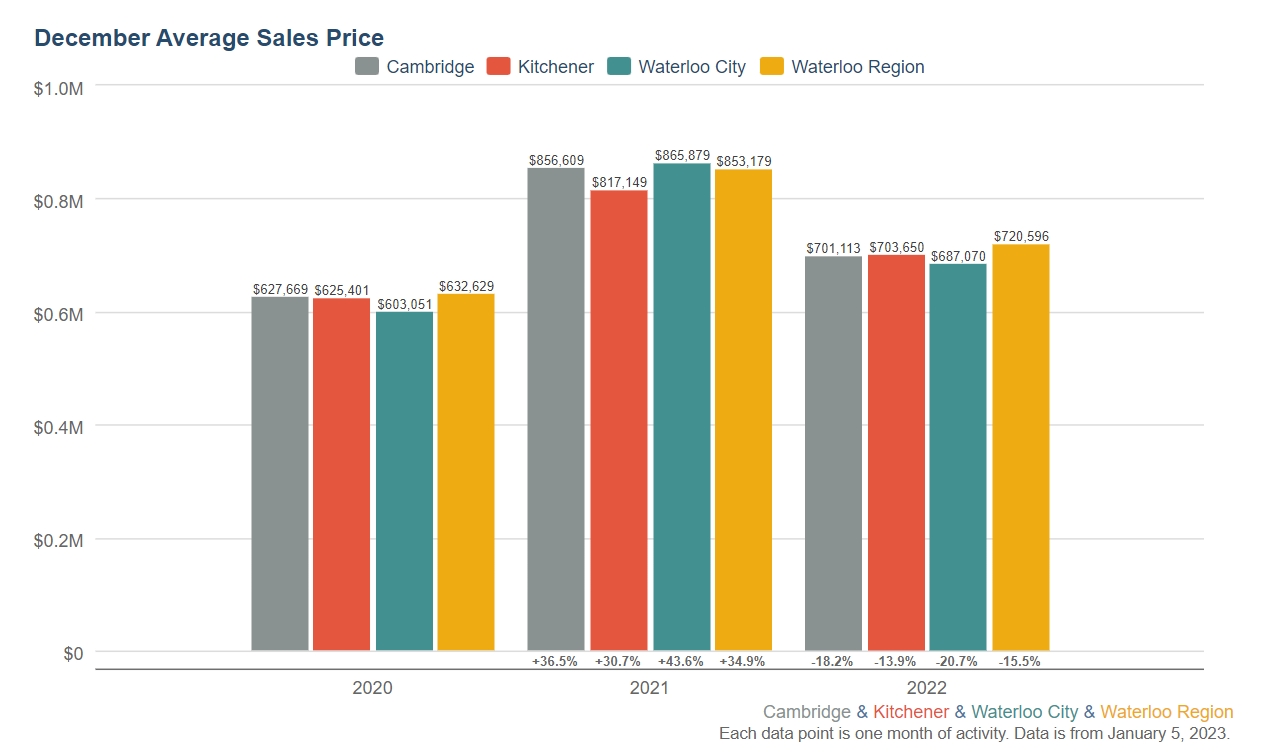 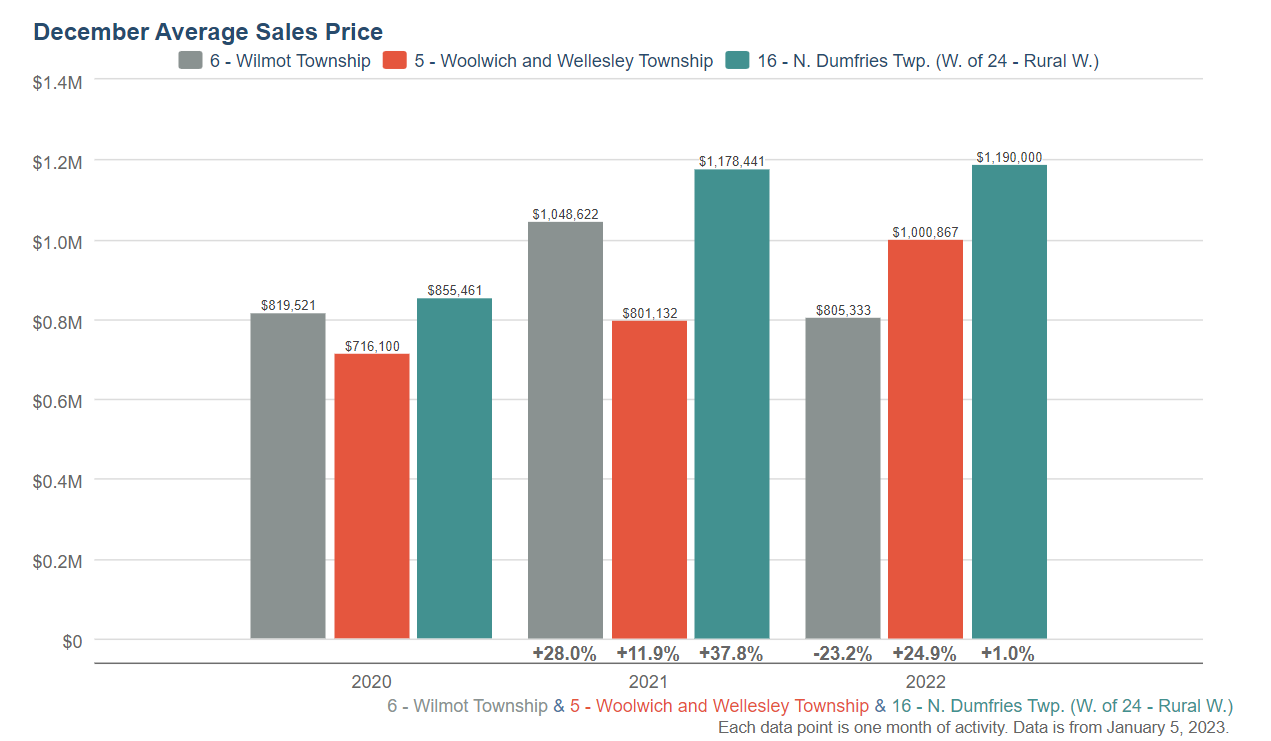 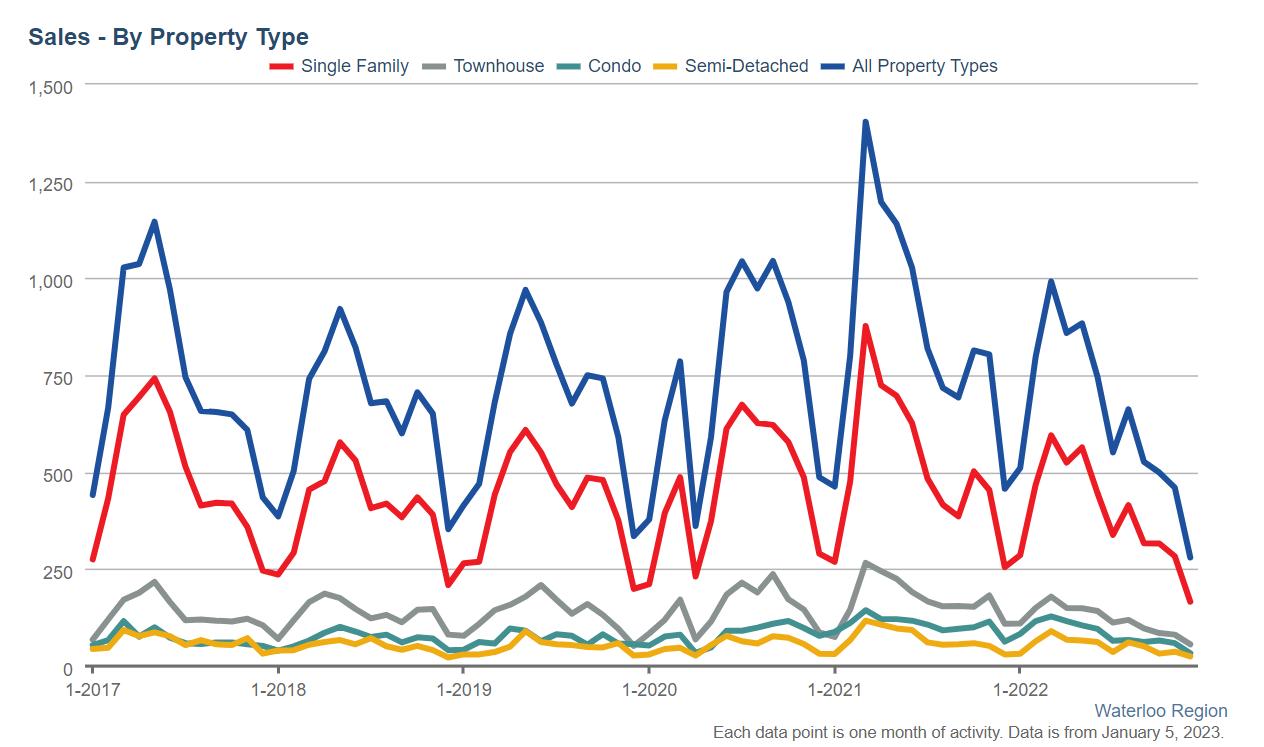 Monthly Supply of Homes for Sale 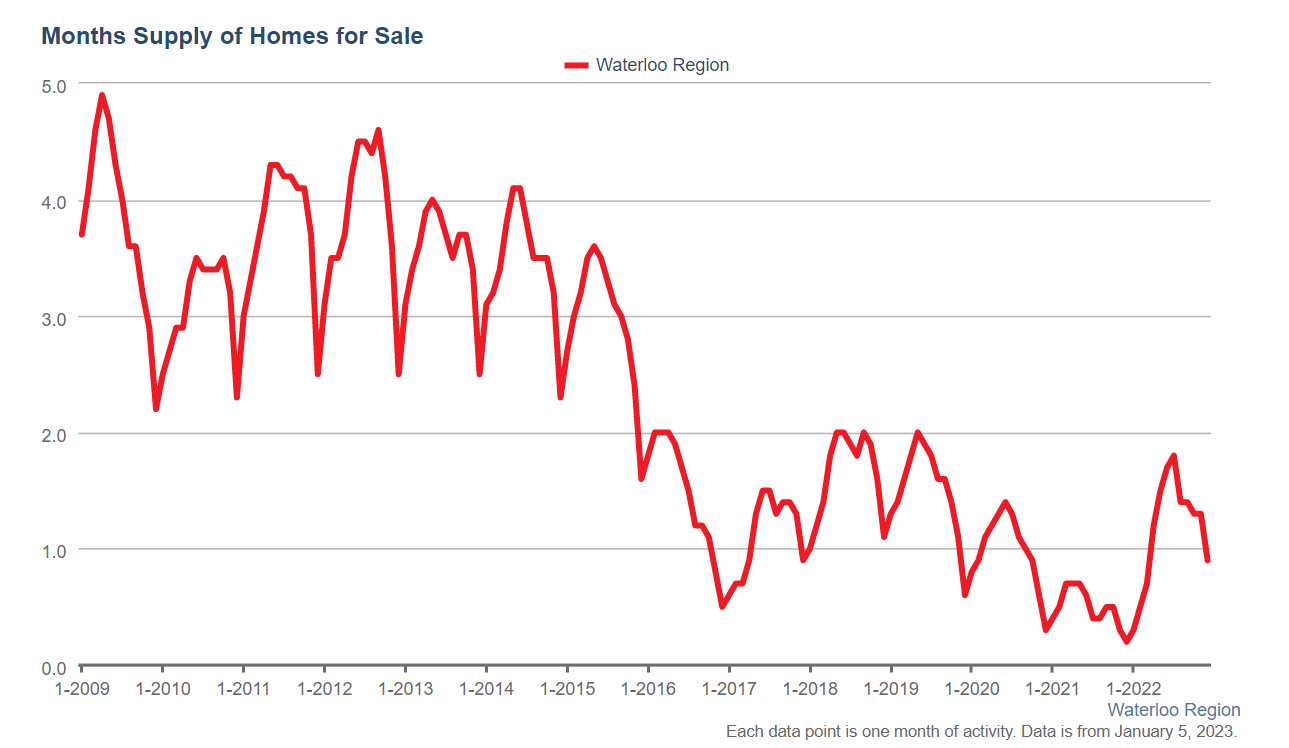 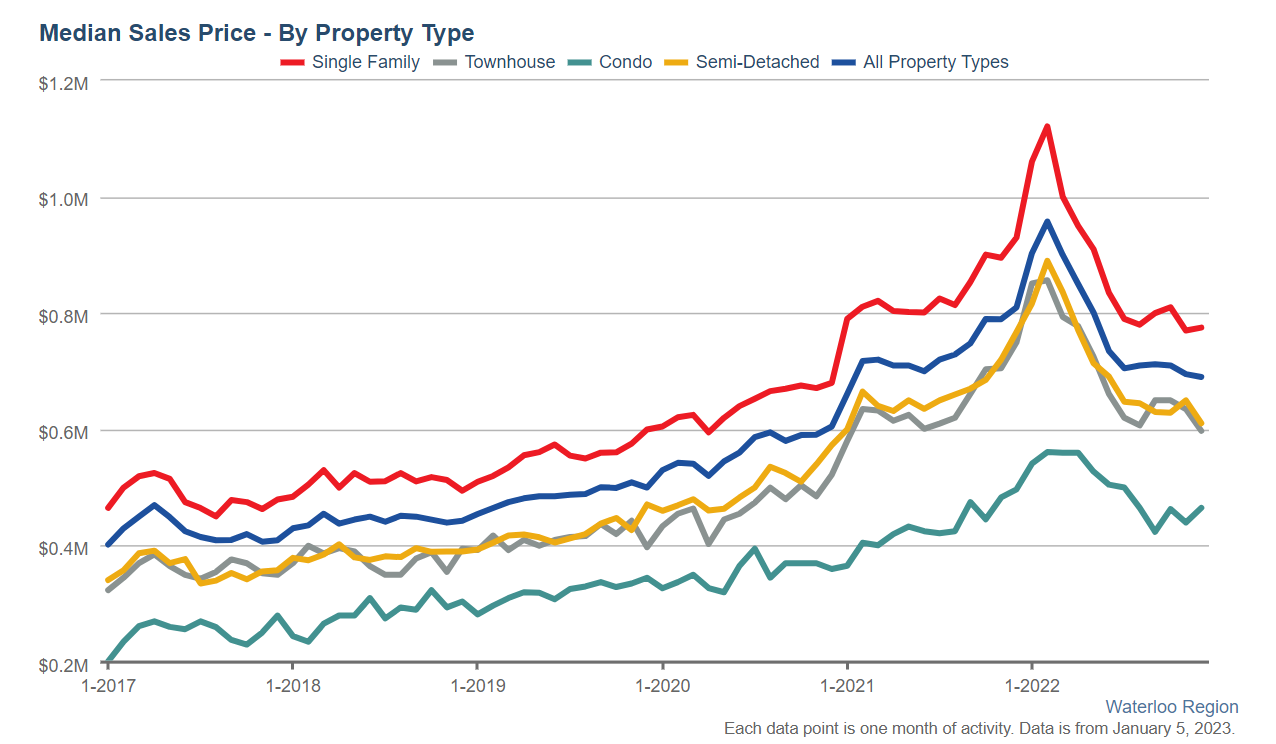 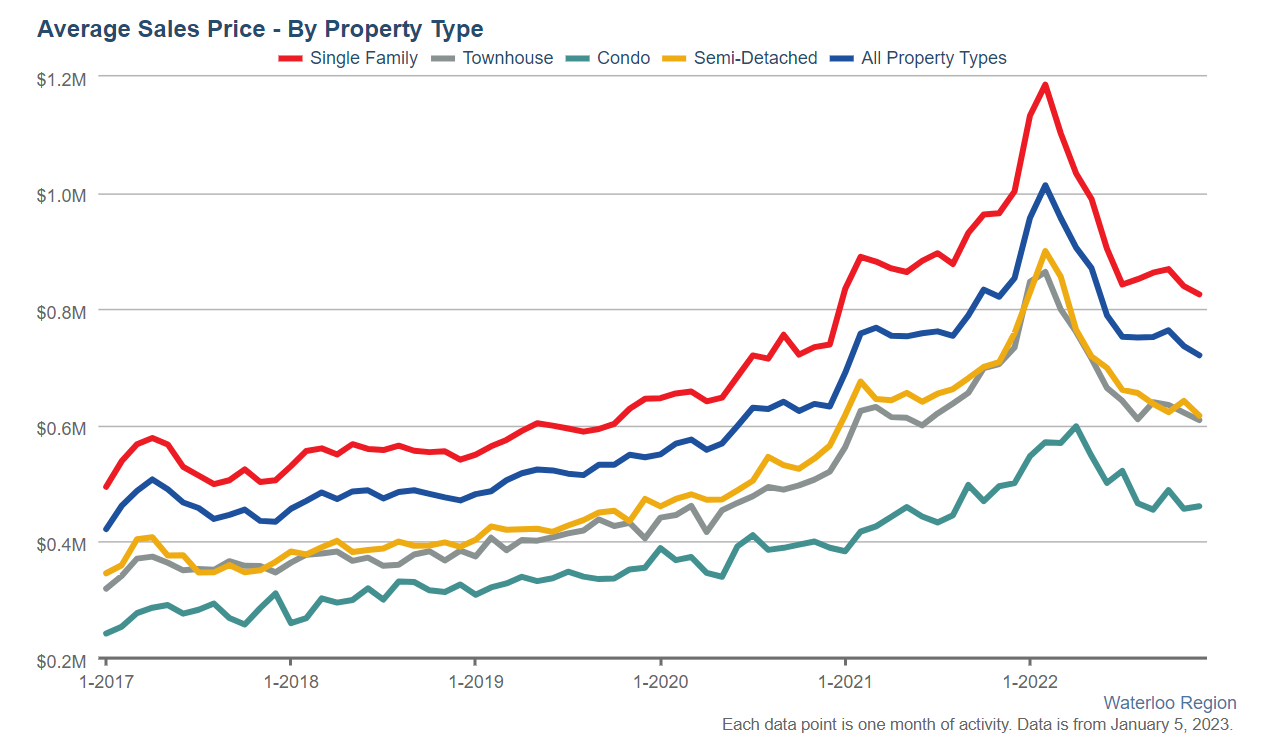 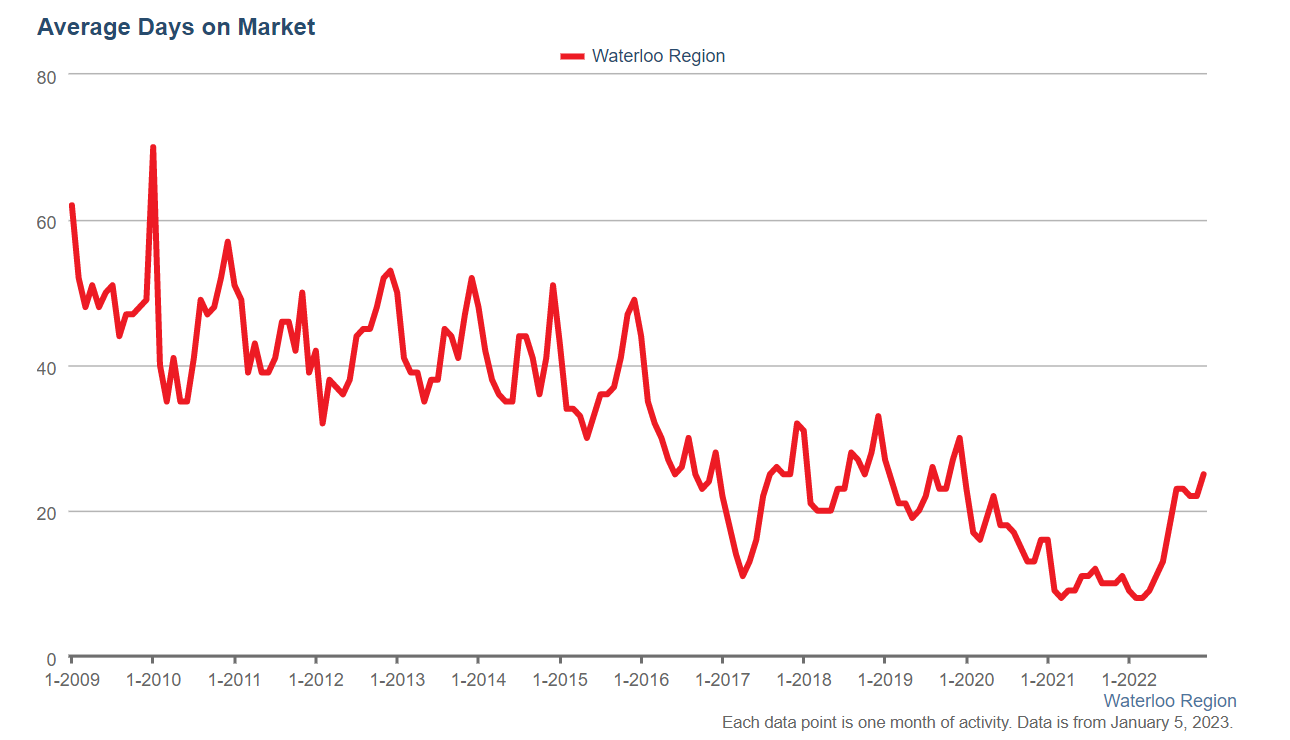 WRAR cautions that average sale price information can help identify long-term trends but should not be to indicate that specific properties have increased or decreased in value. The average sale price is calculated based on the total dollar volume of all properties sold. Months Supply is the inventory of homes for sale at the end of a given month, divided by the average monthly closed sales from the last 12 months. Those requiring specific information on property values should contact a Waterloo Region REALTOR®. REALTORS® have their fingers on the pulse of the market. They know the questions to ask, the areas to probe and what to look for so that you get a complete picture of the property and community you’re considering.